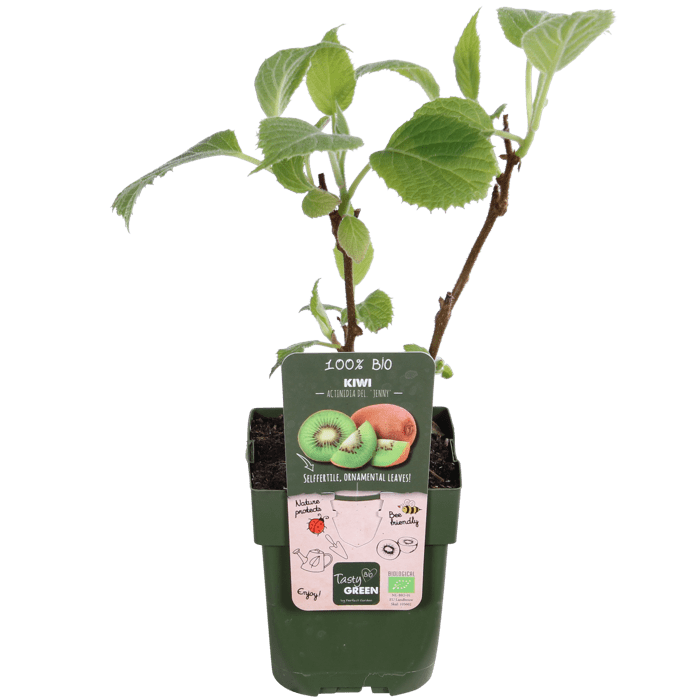 ‘Actinidia delciosioa Jenny’ is an easy and self-pollinating kiwi. The kiwi finds its origin in China. Seeds were brought to New Zealand in the early 20th century. When the kiwi became an important export product, the plant was named after the famous flightless bird, the Kiwi. It is a fast-growing swaying vine and is best placed against a climbing frame, fence or pergola. The kiwi blooms in May and June with white-pink flowers. The first ripe fruits will appear in early September. Keep in mind that it may take several years before the plant starts to bear fruit. Generally, it takes about three to five years. The fruits have a hairy skin, are oval in shape and have bright green flesh, with a white core and a ring of black seeds around this core. The kiwi is healthy and contains a lot of vitamin C. The kiwi plant survives well in our climate and is hardy to -12° C. If the plant is not yet mature, it is best to cover it in winter with severe frost. The kiwi plant needs a warm and sunny location. The more sun, the sweeter the fruit. A south-facing garden, out of the wind is perfect. Pruning is best done in December or January. Prune back the new branches. This is because on the last grown branches the fruit will come the following year. If you do not want the plant to grow too big, it is best to leave 40 centimetres of the newly formed branch.